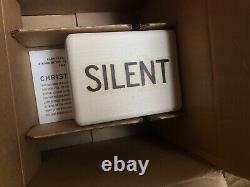 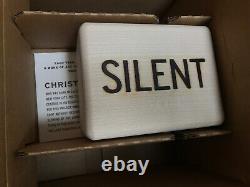 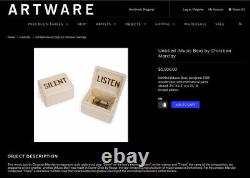 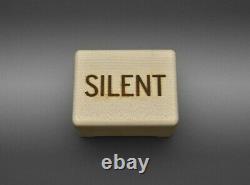 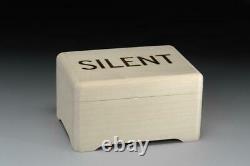 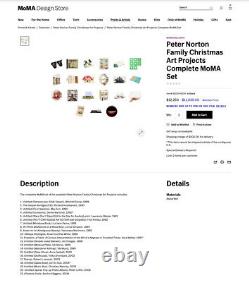 It is one of the nicest I've seen, with tight wood grain and dark rich even contrast in the embossed'SILENT' lettering. Complete as issued with card. You won't find a finer example of this artwork. The piece is in the permanent collection of several American museums.

Marclay received the Golden Lion award for best artist at the 54th Venice Biennale for his 24-hour virtuosic video piece, "The Clock, " which was first shown at White Cube in London in 2010. Since then the demand has grown for Marclays rare smaller works including this limited edition music box. The cultural implications of music and sound are central to Christian Marclay's sculptures, installations, videos, and performances. For this project, Marclay has composed "Tinsel" - a seamless melodic loop without beginning or end that incorporates the gradual slowing of the unwinding mechanism - to play with our expectations of the music box. The artwork, a pine box branded with the word "SILENT" on the cover which opens to reveal the anagram "LISTEN", and a music box mechanism which plays a third anagram, Tinsel is a sly triple word play multiple from the 2005 Peter Norton Family Christmas Project.

Christian Marclay (born 1955 in San Rafael, CA) studied at the Ecole Supérieure dArt Visuel in Geneva from 19771980, at the Massachusetts College of Art in Boston from 19771980, and as a visiting scholar at Cooper Union in New York in 1978. Marclays work has been shown in museums and galleries internationally. He has had important one-person presentations at the Kunsthaus, Zurich (1997), the Museum of Contemporary Art, Chicago (2001), the San Francisco Museum of Modern Art (2002), Whitney Museum of American Art, New York (2010), the Garage Center for Contemporary Culture, Moscow (2011), Aargauer Kunsthaus, Aarau (2015), and Sapporo Art Museum, Sapporo (2017). Marclay received the Golden Lion award for best artist at the 54th Venice Biennale for his 24-hour virtuosic video piece, The Clock, which was first shown at White Cube in London in 2010. Since then, The Clock has been exhibited at a number of institutions worldwide including Paula Cooper Gallery (2011), the Museum of Modern Art, New York (2012), San Francisco Museum of Modern Art (2013), Guggenheim Bilbao (2014), Centre Pompido-Metz (2014), SALT Beyolu, Istanbul (2014), Museum Berardo, Lisbon (2015), and at the Contemporary Arts Center, presented by Prospect New Orleans (2016).

The item "Christian Marclay'Silent/Listen' 2005, Music Box, Norton Christmas Art Edition" is in sale since Sunday, July 7, 2019. This item is in the category "Art\Art Sculptures". The seller is "333jennyp" and is located in Los Angeles, California. This item can be shipped worldwide.