Automaton pull along figure. Robert Burns pursued by a giant mouse. One off 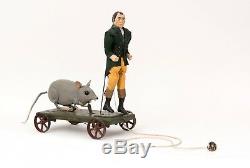 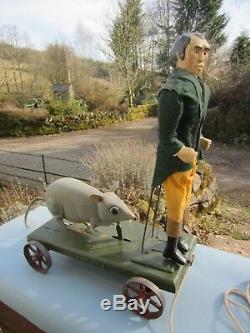 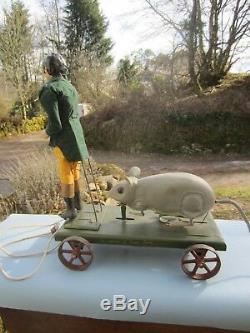 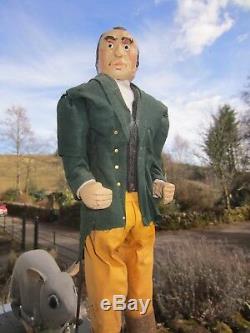 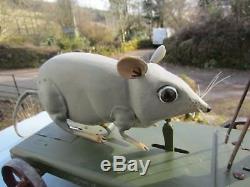 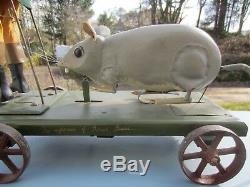 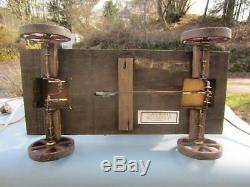 Entitled "The nightmare of Robert Burns", this one off art work , made in Scotland by a skilled local craftsman and now up for sale. There will not be another made.

This is not a toy. It is traditionally constructed from wood, metal, fabric, leather and assorted found 19th century objects. The cast iron wheels were salvaged from a dismantled 19th century toy.

It has been displayed at several galleries over the last few years. When pulled along by its cord, the "worried looking" Mr Burns tried to shake of the attentions of the huge mouse which, despite his efforts, continues to lunge forward at his heels! The hand carved and painted traditional automaton measures 200mm by 400mm by 500mm. THIS IS NOT A SMALL ITEM. The figure incorporates a small piece of elm wood, taken from a tree growing on Ellisland farm, Dumfries, Scotland while Robert Burns was tenant farmer there.

This automaton comes with a letter of authentication. This is a must for Burns enthusiasts, collectors of automata and anyone who wants a most unusual sculpture in their collection. This may incur some extra cost but this will be negotiated and will be sensible.

Sensible inquiries will be answered. The pull along automaton was made a few years ago and has been on display several times at the Yellow Door Gallery Queen Street Dumfries, and has been seen as part of the Dumfries "Big Burns Supper" event. I have not as yet attempted to display it further afield but may do so this year. This wood was used at the time to produce items for an exhibition called "Ellisland Wood".

I personally produced three items for the exhibition. The automaton was not actually one of them, but was made at a later date using some of the residual timber. The item "Automaton pull along figure. Robert Burns pursued by a giant mouse.

One off" is in sale since Monday, October 15, 2018. This item is in the category "Collectables\Household Collectables\Music Boxes". The seller is "memorymotorway" and is located in Dumfries.